This bit about John McAfee is interesting. I am holding onto my judgement until we start seeing what comes of the 31TB file that John claimed to have and some anons have seem to fo his bit about John McAfee is interesting. I am holding onto my judgement until we start seeing what comes of the 31TB file that John claimed to have and some anons have seem to found in the Ethereum blockchain.

Unfortunately it may take a VERY long time to get eyes on all of this info UNLESS it is able to be downloaded in parts.

The mere scope of downloading a single 31TB file is a HUGE task. For comparison, most computers come with about 1TB of internal storage (often times less). External Hard Drives usually have between 2 and 5 TB of storage. The largest storage drive is 18TB Seagate IronWolf for $800 on Newegg.com You would need 2 of those to store all of this.

The other caveat is Server Array farms, where a cluster of hard drives are formatted to act as if they are one. Generally speaking these are expensive and usually only found in corporate businesses.

I sure hope we start seeing pieces of this trove. Its huge, and according to his previous statements, its juicy

Gee. One of the First Cyber Security people ever to exist decided to kill himself after happily living in a Spanish Prison moments after being extradited to the USA. Has a black


Gee. One of the First Cyber Security people ever to exist decided to kill himself after happily living in a Spanish Prison moments after being extradited to the USA.

Has a black and white image of a "Q" posted hours after his death which contained the message:


A decentralized exchange used on the Ethereum Blockchain.

Friday, Jun 25, 2021 - 09:20 PM
Hard drive manufacturer Western Digital recommended that My Disk external hard drive owners unplug them from the internet until further notice, after a flood of customers complained in a support forum that all their data had been mysteriously deleted, according to Ars Technica. 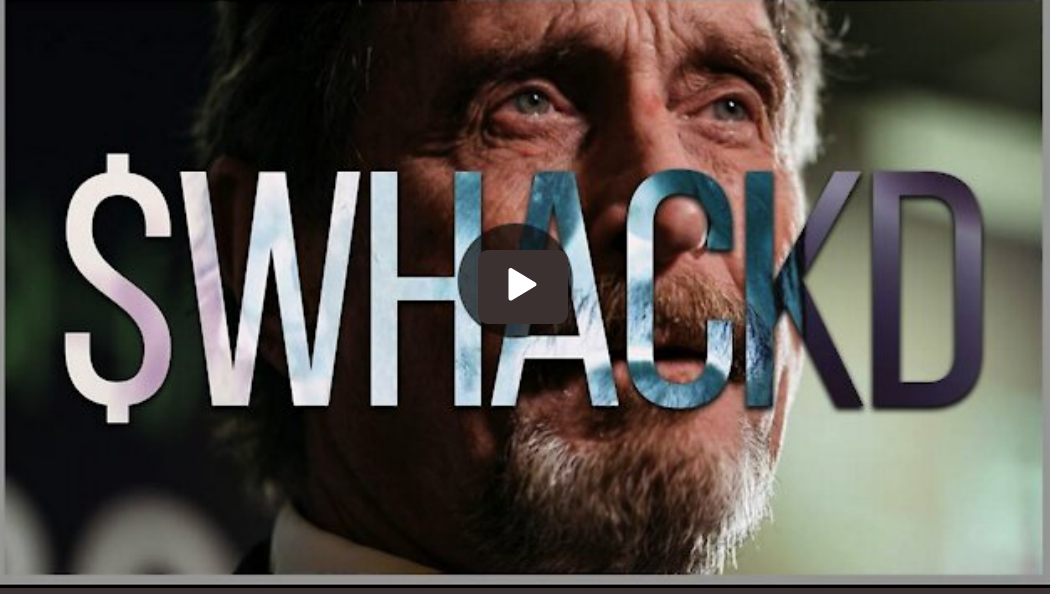 Gab is a social network that champions free speech, individual liberty and the free flow of information online. All are welcome. 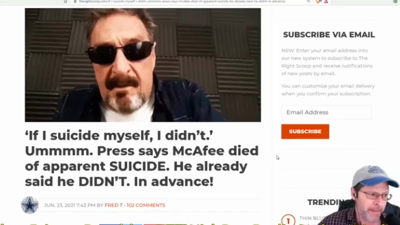 Kenan on Gab: 'McAfee's 31 Terabyte Deadman's Switch has been activated !!! Yes, thankQ for the correction. @OTFWithDanRadioStyle covered this pretty thoroughly on his broadcast today. Here's the clip to get everyone up to speed The transactions going on right now through $WHACKD... 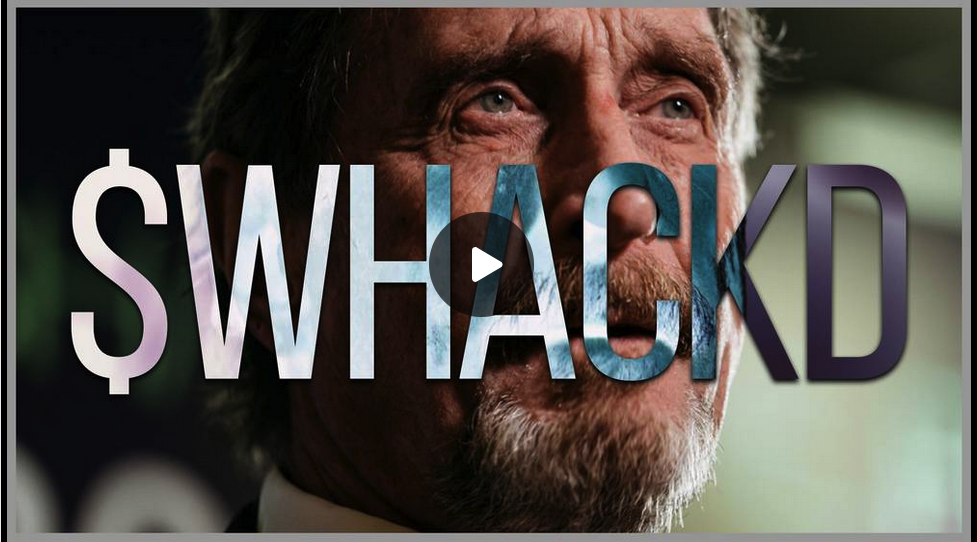 John McAfee: I Could Bring Down the US Government

I don't see the tweet below in his tweets. Doesn't mean he didn't say it. Just a note (McAfee confirms 31 TB of data, in video above)
https://twitter.com/officialmcafee

Was John McAfee Assassinated By The Deep State? $WHACKD
https://greatgameindia.com/john-mcafee-assassinated-deep-state/ 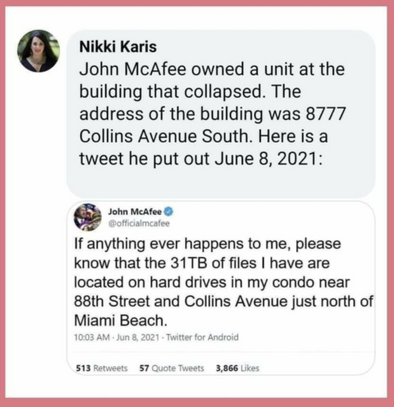 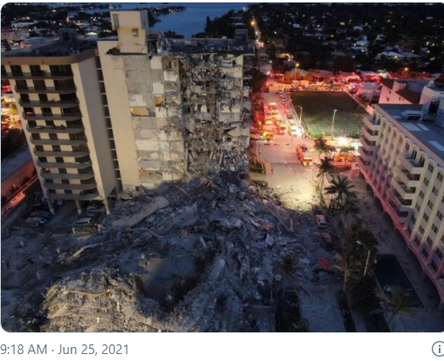 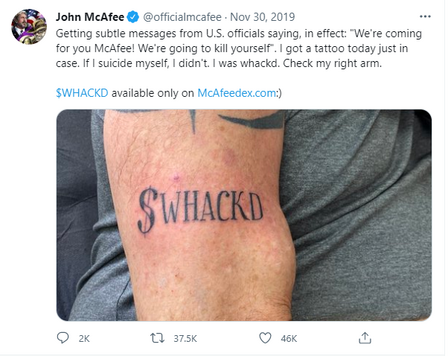 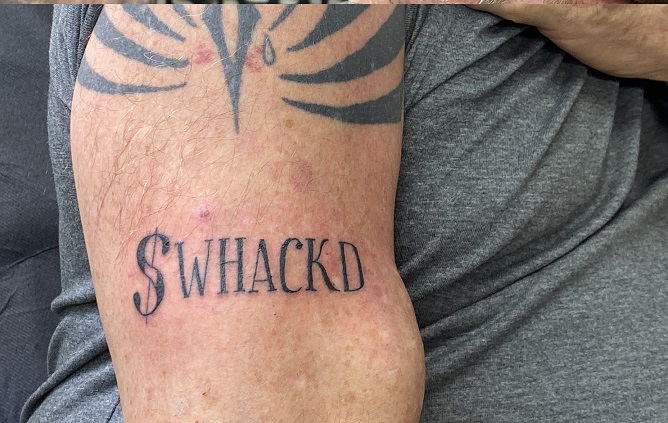 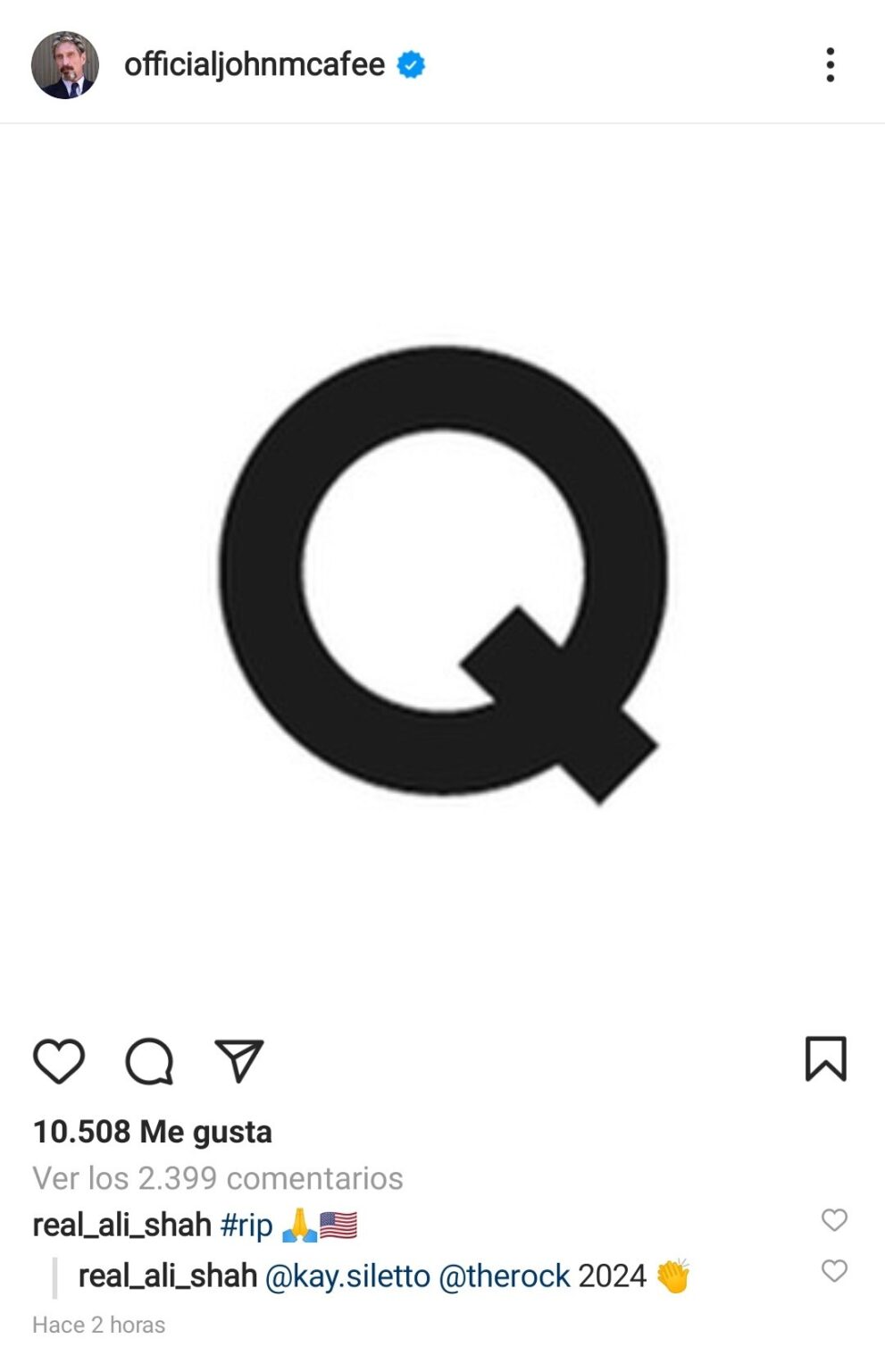 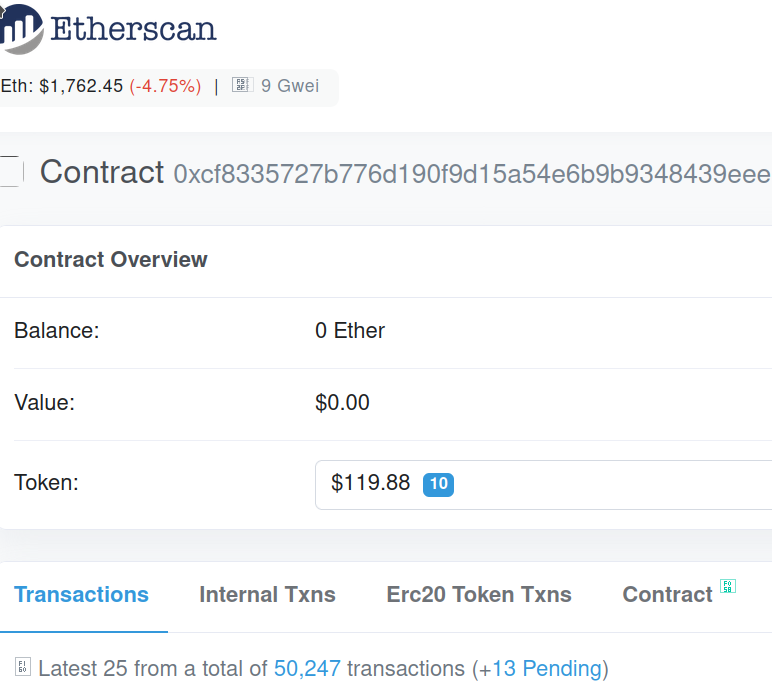 I have no idea what this means either - any help out there?

John McAfee's Deadman's Switch might be real | Poal: Say what you want.

Poal: Say what you want.


John McAfee's Deadman's Switch might be real | Poal: Say what you want.

Poal: Say what you want.

The following bread was dropped on 4chan where anon claims offshore servers are currently being set up where data from the deadman switch will be duplicated and will be spread throughout the network, eventually being made public. The files are 31 terabytes in size. The link referenced in the...

McAfee will have surely utilized a blockchain’s immutability attribute to activate his deadman’s switch.
Look carefully through BTC’s OP_RETURN transactions in the next few days and also the equivalent type of transaction on other crypto coins. 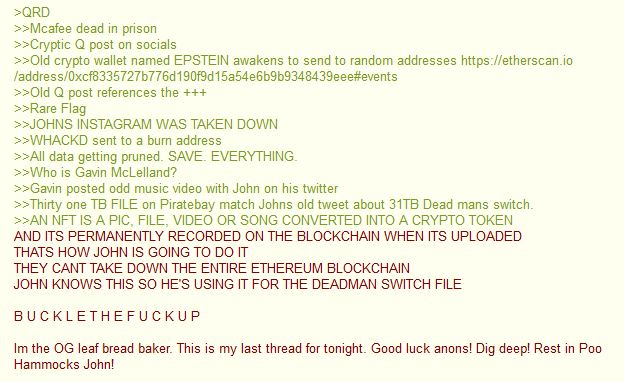 https://youtu.be/NIzLSrlWD4I McAfee told his wife he’d phone later that night. He told his lawyers to prepare an appeal in Spain. Before those things happened, someone suicided hi

$WHACKD General #20 - "/biz/ - Business & Finance" is 4chan's imageboard for the discussion of business and finance, and cryptocurrencies such as Bitcoin and Dogecoin. Well, the dude is dead. John McAfee got himself a $WHACKD tattoo and deployed through Unitrade a contract called EPSTEIN which created the $WHACKD token with wicked burn mechanics.
All of this in honor of Epstein being suicided back then in 2019.
McAfee said he would never commit suicide so the token is already grabbing media attention.
Let's honor him through his last scam.

**DO NOT BUY ANY OTHER TOKEN THAN ONE ENDING WITH eEE:
>Proof

CoinGecko request has been recorded!


$WHACKD is available on Uniswap with MetaMask connected. It's only on ETH, there is a pajeet rugcoin on BSC; don't buy that because it doesn't allow selling. There also is another scam with the same name in UniSwap, be careful.
You can buy it at Uniswap V2, there is currently a good amount of liquidity but the airdrop fags have been dumping their bags in ~9,000 increments.

>ATTENTION:
With every transaction, 10 percent is skimmed off the top. With every 1,000 transactions, one receiver will lose everything—the entire transaction, allegedly.
>This destroys frontrunning bots and is hilarious to watch.
Reddit is still catching on, and the contract has burned nearly 24% of the total supply, you are early.

Will John come back and rugpull us from the grave? Let's find out together! 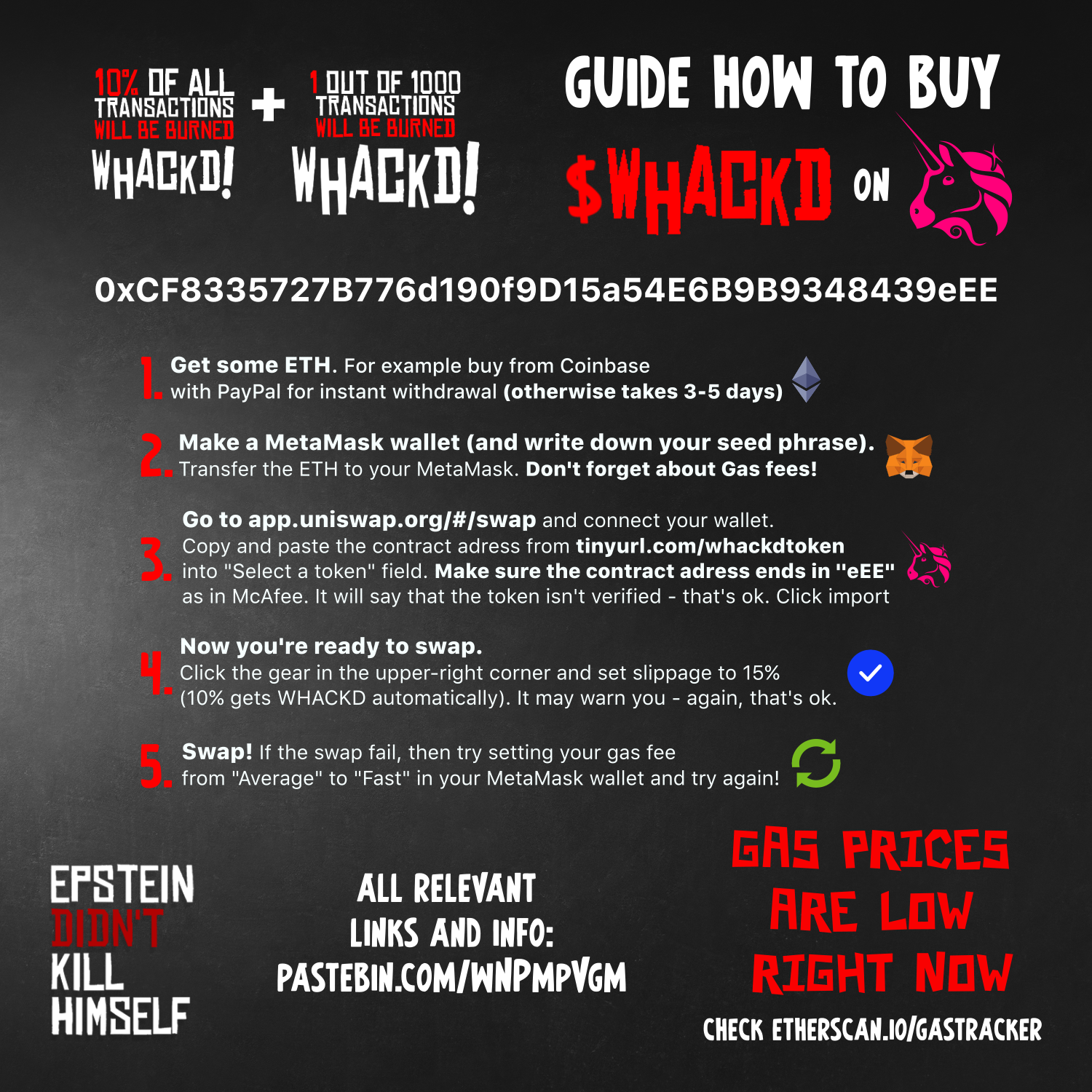